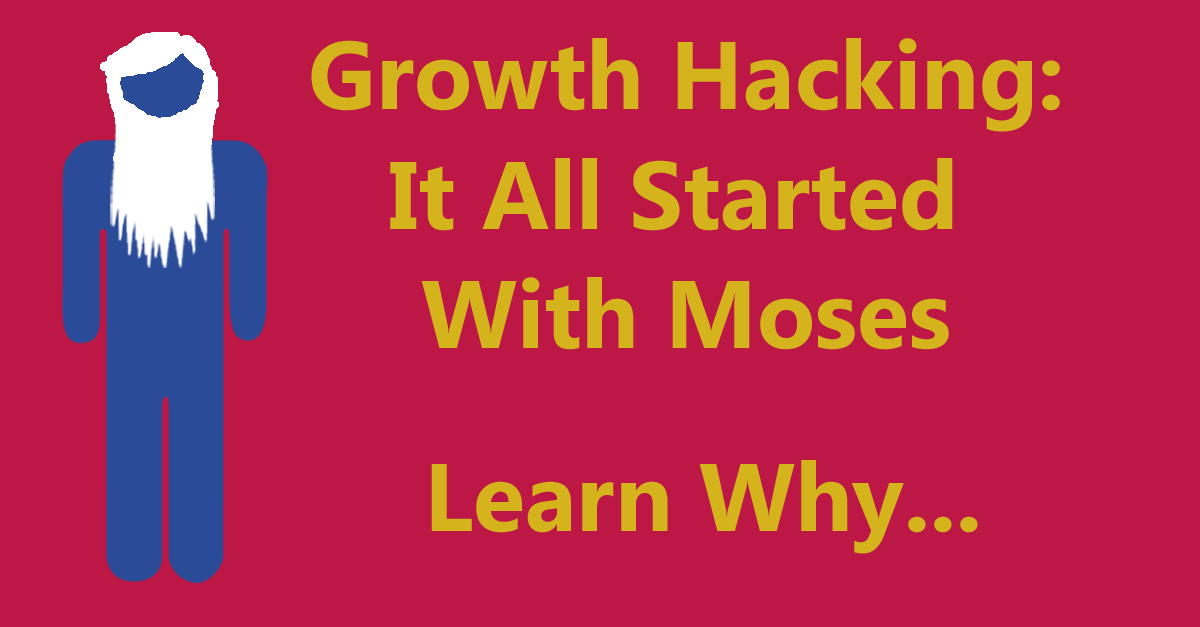 You may not be familiar with Growth Hackers, that’s OK. Let’s take a very brief history lesson that traces the route of this modern day Renaissance person.

Before the advent of just about everything in our lives today, there was Moses, lost in the desert with a bunch of people, trying to find a place to live. With a little prodding from “his boss”, he was encouraged to create the first recorded market research campaign. It was time to put some roots down. But where to go? Since he had no wifi signal and Zillow was still about 4000 years away from existing, he did the next best thing and sent his “analysts” out to do some market research and explore the local lands to find a suitable place to call home. Despite some setbacks, (this isn’t a bible blog so feel free to do a search if you want the whole story) they eventually found a place to live and settled down.

Fast forward a few thousand years to England and you had the Town Crier. The simple duty consisting of having a loud bell and a louder voice in order to share important messages from the King or Queen and probably not so important ones such as the local pub owner who was having an affair with his barmaid. These Criers would often be the main source of information for the local community, especially when so many were illiterate. Much like Twitter, Facebook or LinkedIn today, this was a vital source of distributing information.

By the second half of the 1800s things were moving along and we were well on our way to having plugs to charge devices that wouldn’t be around for another century. Marketing strategies were making leaps and bounds as well. With transportation and communication advances, the marketing folks were always on the cutting edge of taking advantage of new technology to figure out how to sell people more stuff, especially since delivery time was shortened to an almost instant 6 months! Through innovations in the surveys and polls they were taking, marketeers were able to start collecting and analyzing data. This was really the beginning of what we now call Big Data.

Sell Me Something, Sell Me Everything – TV Consumerism

The next really big step forward was the power of TV and TV advertising. While some data regarding radio was being used, TV really drove a lot of advances in marketing. The Nielsen Media Research (Nielsen Ratings) brought methodical ways to track audiences and collect data that was then primarily used for advertising rates. As the industry evolved to syndication, cable and eventually set-top boxes, more and more data was being collected. This really set the stage for the marketing explosion to come via online.

1990s to Now – Now They Know Everything About You

Obviously the last 20 years of technology have seen incredible advances in what we know about people. In fact we are pretty much at the point where there is little we don’t know! When you sell a different product to every household member based on what web page they are in, we have hit the culmination of centuries of marketing development (although many question whether we are going too far from a consumer standpoint – a blog for another day). Whether it’s targeted ads, different website pages being displayed for different viewers or content that is emailed based on past actions you have taken, nobody that is plugged in today can avoid being sold to.

So What Does This Unorthodox History Have To Do With Growth Hackers?

In their own way, each one of these short bits of history was part of what is now called Growth Hacking (research, messaging, data collection and pushing the bounds of technology and marketing). There is no set definition of what a Growth Hacker is, or rather what functions are defined. Essentially they need to be creative and analytical to figure out how to grow a company faster than through traditional avenues (or sometimes in combination with traditional avenues). This could be done through data analysis, ad creation, viral videos, UI design, “outside the box” methods and strategies and lots of experimenting.

To paraphrase an age-old quote…If you ask 10 people in a room what a Growth Hacker is, you will get 10 different answers.

Companies that are startups or smaller and are looking to grow generally gravitate towards a Growth Hacking strategy as it usually a more inexpensive route and they are more nimble. SaaS companies in particular are well known for using these alternative strategies to build a base. However, larger companies are warming up to the same strategies and it’s becoming a larger part of the overall marketing strategy for many companies. Whatever the reason, it is just an evolution of what Moses was doing four thousand years ago when he sent his “analysts” off in the desert.

Need Help Growth Hacking at Your Company?
Free Consultation. Contact Us at 415-439-0727 or info@thirdarch.com

Third Arch was founded out of the premise that “there has got to be a better way” to generate leads.

Historically our strategies have always been one-step ahead of the marketing crowd. Our goal is simple: exceed our client's expectations.